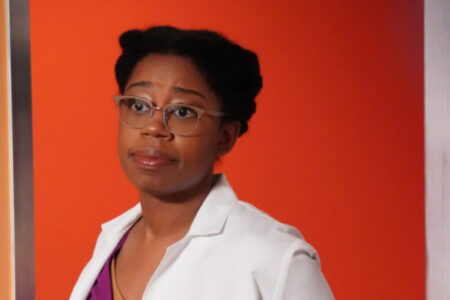 Reasonover plays Kasie Hines on the hit procedural series. She joined in 2018, making her one of the relative newbies on the cast. But she’s definitely found her footing since coming on board and loves to share photos from her trailer.

In the mirror selfie taken in her NCIS trailer, Reasonover sports an adorable, on-trend outfit. She wears some pretty brown pants and a striped shirt. In the caption of the post, she discusses Monday’s episode.

“If I forgot to post this trailer selfie did I even work?” she jokes. “We’re back! [clapping emoji] New @ncis_cbs on Monday!”

Fans were quick to comment on Reasonover’s outfit and get hyped for the next episode. Others wanted to make note of how much they appreciate her character.

“This is the cutest fit,” one fan wrote.

“You are such an asset to that show,” another person commented.

“Looking great. I love the colour of your pants,” another fan commented. ‘
What to Expect from Mondays ‘NCIS’ Episode

With a new episode of NCIS coming Monday, fans are excited. And they should be, because this one sounds interesting.

The episode, Fight or Flight, will look into the world of cage fighting.

“When the body of a Navy lieutenant is discovered missing an eye, the NCIS investigation leads to the world of cage fighting,” the description reads.

Last week’s episode saw the group fighting for their lives on a ship. Now, they’re going into a much different world in order to crack the case.

And it looks like they’re going to do more than just observe. A photo for Monday’s episode shows Special Agent Torres putting on some fighting gloves, and it looks like he’s going undercover.

Actor Wilmer Valderrama was quick to comment that he’s incredibly excited for fans to take a look at Monday’s NCIS episode.

“This episode was one of the most challenging and motivating I have ever shot at #NCIS, this will change everything.. and for Torres,” he teased.

So not only is this going to be an interesting episode that’ll take a look at a different world, but it’ll also be a game-changer, especially for Torress.

New episodes of NCIS air on Mondays at 9/8 Central on CBS. But keep in mind, NCIS will go on a hiatus during the Winter Olympic Games. If you want to watch more shows like NCIS, its spinoff, NCIS: Hawai’i, airs in the hour afterward.