‘NCIS’: Why Christopher Lloyd’s Character Got Gibbs All Types of Emotional

For nearly two decades, Gibbs was one of the most adored characters on cable television. There was just something about his stoic and authoritative, yet secretly very loving, personality that viewers loved to see each week on “NCIS.” 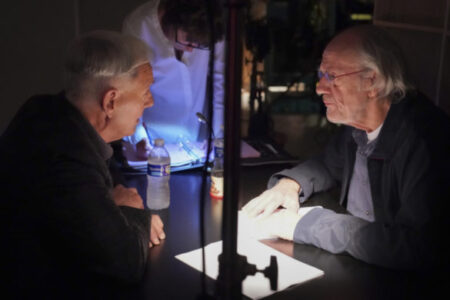 Gibbs was never afraid to show his authority (take, for example, his fondness for slapping Tony DiNozzo on the head), but he also grew very close to the members of his team. Everyone grew fond of his cute grumpy attitude and his drive to get things done. These team members shifted over the years and “NCIS” would often see plenty of guest stars as well.

One of these guest stars had the ability to make Gibbs all kinds of emotional.

It wasn’t completely uncommon for Gibbs to react strongly to a case the team was working on. At the end of the day, Christopher Lloyd’s Joe Smith character caused quite the reaction from Gibbs. Smith was a Pearl Harbor survivor and Gibbs was a Marine in the past.

Joe Smith appeared in the episode “The Arizona” from Season 17, Episode 20. During the episode, Smith is caught breaking into the house of Admiral Michael Caplinger to steal a Purple Heart that belonged to Caplinger’s late daughter. Smith is only willing to return the Purple Heart if Caplinger agrees to have Smith’s ashes interred on the USS Arizona. There’s, unfortunately, a massive problem with that all.

Smith used his brother’s birth certificate to join the Navy when he was only 16. As a result, there is no real proof that he served in the war at all.

Smith ends up confirming his experience by sharing some intimate stories with Gibbs. This is what really got to Gibbs and leads to him talking to McGee about his time in Kuwait. “It took something from me. It’s what war does,” McGee said.
Gibbs’ Connection with Another ‘NCIS’ Character

He went on to talk about his late wife and his late child and how it would have impacted them eventually.

“Maybe there wouldn’t have been enough of me left for them to hang on to. Maybe the best of me was gone … You knew that the guy next to you was willing to d****e for you, and you for him, and you look around and think, it shouldn’t take a war to make the world that simple,” he also said emotionally.

Gibbs didn’t not commonly upon up about his emotional and baggage-filled past with his team members. Smith’s vulnerability caused him to finally open up to McGee. It’s part of the reason Gibbs and McGee had such a strong bond throughout the years.

Gibbs said goodbye to the team earlier this season. McGee is one of the last remaining original members of “NCIS,” which meant the goodbye between the two of them forced some viewers’ “allergies” to act up.

There was a lot of emotion and years of partnership thrown into that tearful goodbye hug.