Richard Warmack, ‘NCIS’ First Technical Adviser, Is the Man Who Made Gibbs!

In early 2003, I was assigned to the NCIS Los Angeles Field Office as the assistant agent in charge when I received a call from NCIS HQ asking me to meet with a producer named Donald P. Bellisario who wanted to do a show about us. I nervously asked HQ what I was supposed to do when we met, and they said two things: make sure our names are correct, and we are never the bad guys. It seemed like a simple mission, so I set out.

When I met Don at his studio, I found him to be one of those larger-than-life characters. He claimed that he had tried for years to work with the Navy to get a show about NCIS on the air, but had been unsuccessful. He ended up doing JAG instead, which was obviously a huge success story for him. I realized why there appeared to be some overlap in his portrayal of what JAG and NCIS agents do.

After I dutifully informed Don that the agency’s priority was to show us for who we were, a small but proud and extremely capable organization driven to uncover the truth, he led me into an adjacent conference room, where I was greeted by no less than ten writers. I was bombarded with questions about the NCIS, what we did, and how we did it for the next couple of hours. I told them some stories and provided general insights into previous cases I had worked on that I thought best represented what the organization stood for.

Don requested that I meet with Mark Harmon and “tell him how an agent thinks and acts.” I scheduled a meeting with Mark the next day, and he unexpectedly asked to come to my house. He genuinely wanted to get to know me in my environment. I was late for work the next morning because we had a minor emergency, and he was patiently waiting in his car in front of my house. I quickly discovered him to be both likable and genuine. I recall him remarking on my outfit, which consisted of a sport coat, a casual shirt with an open collar, and a T-shirt underneath. He probably expected me to be dressed up. Though NCIS agents were required to wear suits on a regular basis, I was not wearing one on that particular day due to the nature of my work. 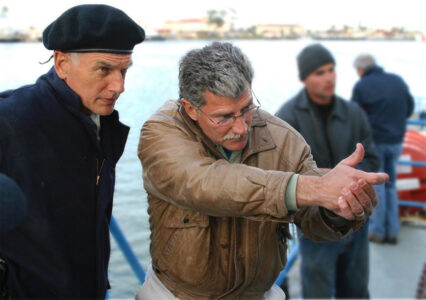 Though I knew he was after my insights, I also had the impression that he genuinely cared about others. Mark listened intently as I answered his questions, and we simply discussed my interactions with the agency. At that point in my career, I had been assigned twice overseas and had assignments on both the East and West Coasts of the United States, including one at our headquarters in Washington, D.C. Mark was genuinely curious about all of those assignments and how the work differed in each.

The next day, I arranged for him to be driven to the Camp Pendleton Field Office to get a sense of what an NCIS headquarters would be like on a Marine Corps base. During that drive, I had the impression that we were just a couple of friends on a road trip. Mark, as I would later discover, had that effect on people. He was a celebrity, but he was able to connect with people on a personal level and make them feel at ease.

Mark met with the agents and support staff at the Camp Pendleton office and was completely genuine and respectful. As we drove back, I recall Mark extolling the virtues of NCIS and its personnel. This marked the beginning of what I will always regard as a valuable relationship in my life.

I spent a lot of time on set with Mark and the other cast members during the first season. He was always indulgent, letting me show him how to do things that I knew he probably already knew about how law enforcement works. Above all, I remember Mark expressing his admiration for our organization and the work we do, which meant a lot to me. 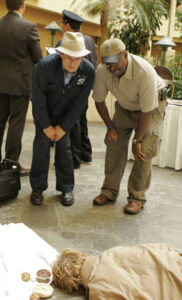 After several months of working with the show, my commitment to the show as the technical adviser began to conflict with responsibilities at NCIS that could not be compromised. Leon Carroll Jr., one of my friends and mentors, was recommended as the full-time technical adviser. Leon had retired from NCIS as the special agent in charge of the Northwest Field Office and was now living in Los Angeles. Leon was a good fit because he was calm and knowledgeable. Leon met Mark, and they hit it off right away, and they’ve been great partners ever since. Leon has remained on the show as a technical adviser, and in my opinion, Mark’s trust in him has been a significant factor in the show’s success.

Mark and I have remained friends and in touch over the years. He has always been the kind and caring person of integrity that I discovered him to be on the first day. It’s great to see someone like Mark Harmon represent NCIS’s great men and women. The key has always been that Don, Mark, and the many others who have put this show on the air have always done what was requested… They spelled our name correctly, and they never make us the bad guys.