‘NCIS’: Here’s How Pauley Perrette’s Abby Sciuto Was Written Off the Show

For longtime “NCIS” fans, there’s a special place in their heart for Abby Sciuto, the enthusiastic Chief Forensic Scientist with a bubbly personality and a love for bubbly drinks. 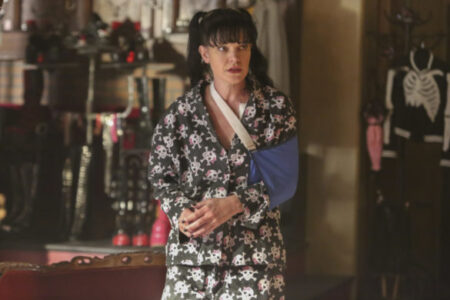 Pauley Perrette joined “NCIS” at the very beginning of 2003 alongside cast members like Mark Harmon, Michael Weatherly, and Sasha Alexander. Her character defied a lot of norms and was instantly beloved. She also became exceptionally close with fellow characters like Gibbs and Special Agent Tim McGee.

All this just made it harder to say goodbye to Perrette when she left the show in 2018. Her final appearance was in the episode “Two Steps Back” from Season 22. Before that was the episode titled “One Step Forward.” It was during this episode that Abby experienced something so traumatic it made her rethink her career choices.

During that episode, MI6 Agent Clayton Reeves (played by Duane Henry) gets cornered by a delirious mugger with a gun. The person fires the gun at them and Reeves steps forward to protect Abby to the best of his ability. It ends up costing him his life.

After that, Abby spends some time recovering from her injuries and from the entire traumatic event. She then makes the emotional decision to leave “NCIS” for good. Instead, she moves to London, England, and sets up a charity in Reeves’ honor, which was a lifelong dream of his. She announces the news to everyone on the team, except for Gibbs.

By all accounts, it was an exceptionally emotional exit marked by death, healing, and goodbyes. You may have noticed that her goodbye with Gibbs was lacking something. Pauley Perrette left the show due to unsolvable issues with Mark Harmon. The tension eventually boiled over, resulting in the actors’ scenes being filmed separately during the final days on set.
Tension Between Pauley Perrette and Mark Harmon

Perhaps what made Perrette’s exit from “NCIS” extra emotional is knowing how unhappy she was on the program near the end.

She has also made it abundantly clear that she would not return to the show, ever. She tweeted that she was “terrified of Harmon and him attacking me. I have nightmares about it.”

NO I AM NOT COMING BACK! EVER! (Please stop asking?) I am terrified of Harmon and him attacking me. I have nightmares about it. I have a new show that is SAFE AND HAPPY! You’ll love it!#HappyPlace Love y’all!

The whole disagreement actually stems from one thing — incidents related to Harmon’s dog. Apparently, his dog was on set one day and bit an “NCIS” crew member. She said she was silenced from speaking out about what went down that day. Regardless, she said she “fought like hell to keep it from happening again.”

Clearly, the matter was never truly resolved, seeing as she left the show. CBS had responded, “Over a year ago, Pauley came to us with a workplace concern. We took the matter seriously and worked with her to find a resolution. We are committed to a safe work environment on all our shows.”