Tony DiNozzo always called his dad Senior. And even after Michael Weatherly left NCIS, producers still wanted the dad to stick around. 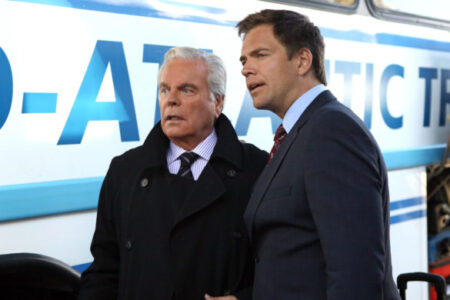 And why not. Robert Wagner, who plays Anthony DiNozzo Sr., is a fabulous actor. His character on NCIS was a lot like Wagner in real-life — suave, handsome and popular with the ladies. But Senior also was a bit of a con, especially when keeping up the act that he’s rich. We’re assuming Wagner, who starred in such TV shows as It Takes a Thief and Hart to Hart, doesn’t need to pretend he has money in the bank. As for women, that’s all true for Wagner’s real life. He twice was married to Natalie Wood.

More recently, Wagner was part of the Austin Powers movies.

NCIS loves to bring on special guest stars to play the relatives of the agents. Ralph Waite portrayed Gibbs’ dad. America knew Waite as the beloved John Sr on The Waltons. James Garner was supposed to play the recurring role as the father of Mark Harmon’s character. But Garner suffered a stroke before filming. Meanwhile, Billy Dee Williams played Gibbs’ dad’s best friend and Gibbs’ namesake.

Wagner First Appeared on Series in 2010

But let’s circle back to Wagner. He really made an impression on NCIS, considering he’s appeared on 13 episodes. The first time Wagner played Senior was in the episode Flesh and Blood, which aired in January, 2010. Agents were trying to figure out who was trying to k*** a Saudi prince.

Wagner’s final NCIS appearance was in March 2019. Note, this is three years after Weatherly left the show. In Bears and Cubs, Senior also is a poker buddy of Jimmy’s father-in-law.

Wagner is 91 now. The Bears and Cubs episode was his last acting job anyone has seen. But according to IMDB, Wagner is involved with The Trouble with Billy, which is in post-production. His name also is linked to the disaster movie, SuperSonic, which is in pre-production. Wagner can pull off disaster movies. After all, he was part of The Towering Inferno, which defined the disaster genre in the early 1970s.

NCIS fans would love to see Wagner back on set. Plus, they’re also clamoring for Michael Weatherly to reprise his role. Weatherly left NCIS, but stuck with CBS. He stars in Bull, playing the lead character based on Dr. Phil when Dr. Phil was a jury consultant.

Late last fall, CBS announced that this season would be the last for Bull. NCIS wrote Weatherly off the show, but they didn’t kill him. Rather, Tony left D.C. to raise the daughter he fathered with Ziva, who’d just died in an explosion. But NCIS fans know that Ziva didn’t die. She’d gone deep undercover to find out who tried to k*** her. It would be delicious to see both Tony and Ziva return.