Pauley Perrette, star of NCIS, expresses gratitude to former co-stars as they reunite for a charitable cause

Pauley Perrette, star of NCIS, expressed her gratitude to a number of her former co-stars on social media after they banded together to raise funds for a worthy cause.

Pauley Perrette hasn’t been seen on CBS drama NCIS since leaving the role of Abby Sciuto in 2018, but the actress still has a large online fan base with whom she shares regular updates. In a recent tweet to her 708k Twitter followers, Perrette praised some familiar faces from the world of NCIS for banding together to support the Los Angeles Fire Department.

The actor posted a video of herself with a number of Los Angeles celebrities who all showed their support for the LAFD.

“Me and a bunch of people you know and love are asking you to join us in supporting our @LAFD,” she wrote.

“Fire departments rely on the people they serve for supplies. WATCH OUR VIDEO HERE AND #SupportLAFD! (It’s fantastic!)”

“Every single day, our Los Angeles Fire Department takes thousands of calls from people in need,” Perrette says to the camera in the video. 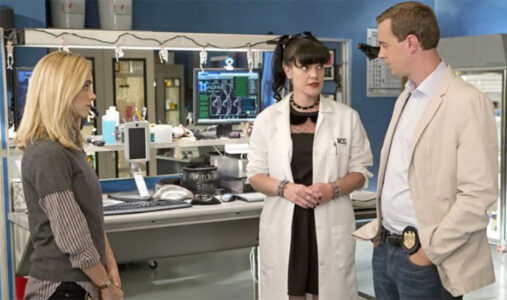 Alec Mapa from Ugly Betty then appears, revealing that the LAFD is now raising funds for the necessary equipment to keep the city safe.

A number of other well-known celebrities, including Tom Bergeron and Diane Farr, also weighed in.

Perrette was also joined by NCIS veteran Rocky Carroll, who pleaded with viewers to “help them help us.”

Perrette’s initial appeal has already received hundreds of likes and dozens of retweets as she hopes to raise funds for the LAFD.

Me and a bunch of people you know and love are asking you to join us in supporting our @LAFD
Fire departments depend on the people the serve for things they need.
CA #SupportLAFD and WATCH OUR VIDEO HERE!
(It’s so good!)https://t.co/2trGZLjWnZ pic.twitter.com/AL0B9EPLii

This isn’t the first time Perrette has demonstrated that her bonds with some of her NCIS co-stars remain as strong as ever after her departure.

Perrette received an outpouring of love in January when she shared an emotional post commemorating the one-year anniversary of her father’s d3ath.

Perrette captioned a series of photos of herself with her father, “One year ago my beloved dad d1ed of #C0v1d.”

“His political party told him it was a hoax, and he, like hundreds of thousands of others, was murd3red as a result.” Vaccines did not exist at the time.

“It was just exhausted health care workers and d3ad bodies all over,” she went on. “As for me…

Among those reacting was Jimmy Palmer co-star Brian Dietzen, who expressed his condolences to his former co-star.