Finally, CBS gives us details about the newest NCIS episode. It feels like months rather than a couple of weeks since the last time we watched our favorite agents. 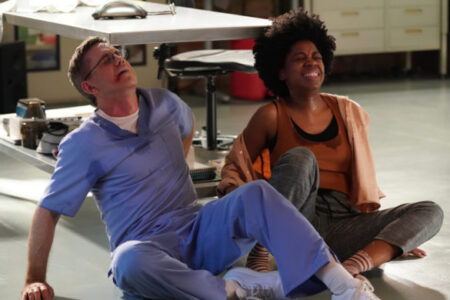 Here’s what we know about an episode called “The Helpers,” which will air Feb. 28. Jimmy and Kasie, y’all are in danger.

And let’s go to the NCIS plot summary to see what’s going on with Jimmy (Brian Dietzen) and Kasie (Diona Reasonover). Here’s what CBS provided: “While investigating the d*****h of an intruder at Quantico, Jimmy and Kasie are exposed to a deadly biotoxin, and the NCIS team calls on Doctor Carol Wilson (Meredith Eaton) for help as they race to find the antidote. Also, Torres tries to distract Jimmy’s daughter, who came to the office to spend the day with her dad.”

This is a very Jimmy-centric NCIS episode. And here’s why. Dietzen wrote it. And as they say, you write what you know. Jimmy’s never-seen daughter, Victoria, is stopping by. She’s portrayed by Elle Graper, who is making her first NCIS appearance. Meanwhile, it looks like Jimmy’s dead wife, Breena (Michelle Pierce) will be in the episode, too. She hasn’t appeared on the show since 2015, since the episode in which she gave birth to Victoria. Breena died of complications of Covid early in the pandemic, so she may reappear in a flashback.

It’s not the first time this season that NCIS writers have featured relatives of some of the characters. In “Docked,” McGee’s wife, Delilah (Margo Harshman) and mother-in-law Judy (Patricia Richardson) were a big part of the NCIS hour.

Then there’s this episode’s special guest star, Meredith Eaton. She plays Carol Wilson, a long-time friend of Abby’s. Eaton is a fan favorite. The NCIS crew filmed this episode right after Thanksgiving. And Dietzen, along with Wilmer Valderrama, used their social media accounts to pub the episode.

“Sometimes you get to write something for tv,” Dietzen wrote. “And sometimes that means you get to hang out with friends you haven’t seen in far too long. So happy you’re here Meredith Eaton!”

This will be Eaton’s fourth appearance on NCIS, but her first since 2013. Eaton also played Carol Wilson in an NCIS: New Orleans episode. Wilson is a researcher for the CDC. You don’t want her working her case, because that means it could be scary bad.

There’s no word on whether NCIS will touch on a plot twist the show introduced in “Fight or Flight,” the last new episode, which aired Jan. 24. In it, Torres seemed to be spiraling and no one is really sure why. He’s been upset since Gibbs (Mark Harmon) left the office. Torres might be hitting bottom over continuing abandonment issues with his dad. But whatever is causing it, Torres is pushing away his friends. And he almost got his butt kicked in an underground cage-fighting match. Instead, he beat up a much larger fighter.

Jimmy talked to Torres at the end of “Fight or Flight,” so maybe Dietzen continues the storyline in the story he wrote.

Stay tuned. The newest NCIS episode is Feb. 28. Most of your favorite network shows return in the last week of February after breaking for the Winter Olympics