Remember when Dr. Jimmy Palmer’s (Brian Dietzen) daughter Victoria was a baby? Yes, NCIS has been on so long that she’s now old enough to visit her dad when he and forensic scientist Kasie Hines (Diona Reasonover) are quarantined after being exposed to a deadly biotoxin. 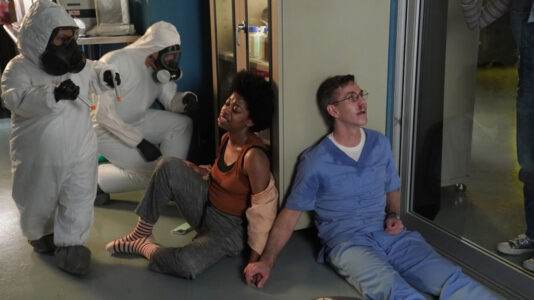 In the first new episode after the Winter Olympics/Celebrity Big Brother break, “The Helpers,” co-written by Dietzen, that exposure comes during an investigation into the death of an intruder at Quantico. The team calls in expert immunologist Carol Wilson (the returning Meredith Eaton, last seen in Season 11) for help as they race to find the antidote. Plus, Special Agent Nick Torres (Wilmer Valderrama) tries to distract Victoria (Elle Graper), who came to the office to spend the day with her dad.
Scroll down for a look at Victoria’s visit to the office and to see her father in quarantine, as well as Eaton’s return and just how bad things are going to get for Palmer and Kasie. Take your daughter to work day