NCIS: Why Playing An Autopsy De a d Body Is So Bad

People are ‘dying’ to be an autopsy cadaver on the hit CBS show NCIS – but actors need a strong constitution to play the role properly. Playing an autopsy dead body on NCIS is a bad experience – in fact, it could be the worst job on TV, according to some of the CBS show’s stars. NCIS, originally a spinoff of JAG, is currently in its 19th season and has seen many changes of characters over the years—Special Agent Leroy Jethro Gibbs recently left after Mark Harmon exited the program as a series regular. Special Agent Anthony DiNozzo, who appeared with Gibbs in the pilot episode, “Yankee White”, left back in season 13.

But whatever happens to the line-up, one thing that is more or less guaranteed on any NCIS episode is a d*** body or two. Any that are discovered in suspicious circumstances will see the team of special agents from the Naval C****l Investigative Service grab their gear and work together to solve the case. After the team — including special agents Timothy McGee (Sean Murray), Nick Torres (Wilmer Valderrama), and Jessica Knight (Katrina Law), along with current gaffer Alden Parker (Gary Cole), who did not replace Gibbs, work the crime scene, the d***** bodies are sent back to NCIS headquarters autopsy for Jimmy Palmer (Brian Dietzen) to work his magic.
Viewers who have wondered whether these corpses are fake or real may be surprised to hear that many of them are indeed played by in-the-flesh actors. On the face of it, the gig seems like an easy role to undertake, but in reality it is a lot more involved than simply lying still. Over the years, some of the CBS show’s stars have admitted that it is quite an uncomfortable and difficult part to get right, and lying on a cold metal table in the depths of the autopsy room is more than just about “playing d*****d” – especially on a long filming day. 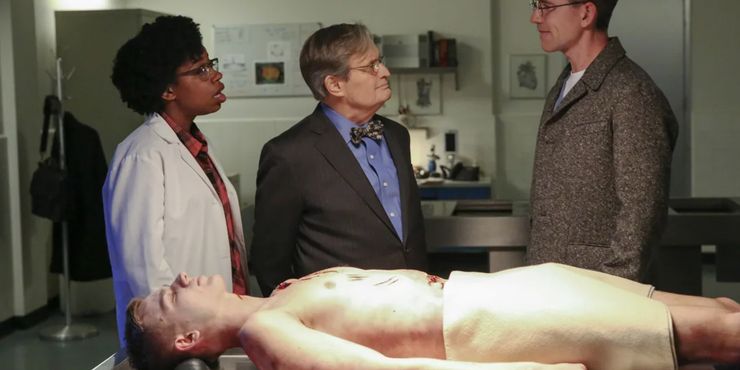 Executive producer Mark Horowitz revealed on a behind the scenes episode entitled “Inside NCIS Autopsy: Bodies of Work”: “People are dying to be dead people on this show. When we can, we like to use a real person to play the dead body because even though the prosthetic bodies are truly remarkable — you can get very close to them, and they look completely realistic — there’s something about real skin, the way light bounces off of it which you can do with makeup that just feels more real.” This fact is likely doubly true for those members of the cadaver cast who weren’t hired specifically for this role as an extra. For example, no viewer will likely forget the shock death of Caitlin Todd (Sasha Alexander) back in season 2, when she spoke to Dr Donald “Ducky” Mallard from the grave. Mark continues: “I tell them, I am very upfront, I say it’s horrible, this is the worst job you’ll ever have… I try to root out the faint of heart as early as possible. And if they’re going to be in one of these sliding doors we talk all about claustrophobia.”

Mark is not the only member of the team to deter potential candidates. Dietzen, who plays Ducky’s successor, added his thoughts about the rather unwelcoming environment. The actor stated, “You’re on a cold, metal table almost naked, with a very hot light shining on your private area. And you have to hold your breath and not move at all when we are filming.” (via The Columbus Dispatch). McCallum echoed this sentiment during an interview. He said: “These poor actors and actresses come along and lie on a steel table, and so our main concern with the bodies is to keep them warm, keep them happy, and let them go home in one piece.” (via CBS News).

While the NCIS role sounds like a bad gig, for some actors, the role has helped them conquer a life-long phobia. Actor Walter Fauntleroy, who played Petty Officer Lamar Finn (season 13, episode 16, “Loose Cannons”), “overcame claustrophobia as he was moved in and out of the autopsy room’s cadaver drawer.” (via Twitter).