NCIS alum Pauley Perrette just posted some lyrics to a song she wrote, saying they “keep coming back up.” Perrette played Abby Scuito on NCIS for years before leaving the show. Her character was one of the most iconic in the show’s near two-decade run. 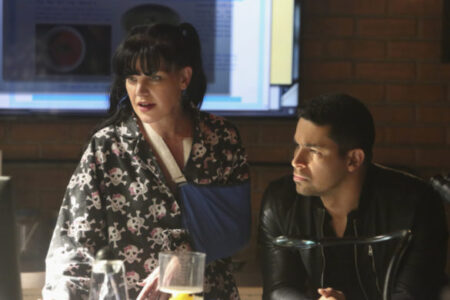 “The song, Camoflage, is about war.

I wrote this song #Camoflage
I wrote it about a #war before,
Years ago

And it keeps coming back up

The lyrics she shared say “What are we fighting for?/ The front lines are blurred on what the fight is for./While heaven cries out that hell is war./A man reads into a microphone.”

I wrote this song #Camoflage
I wrote it about a #war before,
Years ago

And it keeps coming back up

Perrette has since retired from acting and is now an activist and advocate. She didn’t part with NCIS on good terms, especially with Gibbs actor Mark Harmon, who she says created a toxic work environment. Fans really miss her on the show, but it appears leaving is what was best for her.
Perrette isn’t the Only Major Actor to Leave ‘NCIS’

Shows that have lasted as long as NCIS are almost always bound to have a lot of cast turnaround. It’s a huge commitment to stay on a show for five years, let alone two decades. So it’s not just Perrette who has jumped ship since the show started.

In fact, the cast is almost unrecognizable from the cast fans fell in love with in the early seasons. Ziva David actress Cote De Pablo has left the show. She made a surprise appearance in season 17 where it was revealed her character is actually alive. But since then, she hasn’t appeared on the show.

DiNozzo actor Michael Weatherly has also said his goodbyes to NCIS. Following his departure, he joined the series Bull on CBS. Bull is coming to an end after its current season.

The most recent cast exit, however, is the biggest. Gibbs actor Mark Harmon left the show after being its star for almost two decades. He featured in the first four episodes of season 19 before saying goodbye. His character decided to retire and move to Alaska, leaving the team to move on without him.

While fans were sad that Harmon left, NCIS has hired Gary Cole to take his place, and he’s been making quite the impression. His character, Alden Parker, has actually won over a lot of fans. Considering how big the shoes are that he’s filling, that’s incredibly impressive.

So while the cast is changing, it doesn’t seem like the end is quite near for NCIS. If you want to check out new episodes as they come out, the show comes back on Monday, February 28th, following the end of the 2022 Winter Olympics.