NCIS alumni Emily Wickersham just shared a sweet Valentine’s day photo with her husband, James. Wickersham played Ellie Bishop on the hit series until leaving after the season 18 finale. She also recently had a baby. 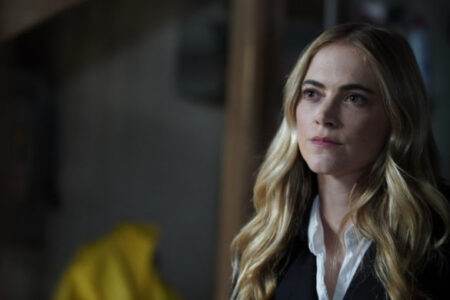 The adorable photo comes with a simple caption.

“Happy Valentine’s Day @jamesbadgedale You have my [heart],” she wrote.

The adorable candid makes Wickersham look very much in love.

Fans shared the joy of the holiday with Wickersham in the comments.

“You two are so freaking cute together! Happy Valentine’s Day to you both,” one fan said. Another wrote, “Happy Valentine’s day to you!! It’s wonderful to see you happy.” Others were a bit more to the point, describing the pair as “couple goals.”
Here’s Why Emily Wickersham Left ‘NCIS’

Fans were just starting to get used to Agent Bishop when Wickersham made the decision to leave the hit series. While there’s no confirmed reason, it appears Wickersham left as she was growing her family, and wanted to potentially explore creative projects elsewhere.

Following the season 18 finale, Wickershap released a statement about her exit.

“Hangin this hat and jacket up. What a great ride it’s been. This cast, this crew, are top notch. I can’t say enough kind words about this group that I’ve had the pleasure of working with for close to 8 years now and 172 episodes later,” she wrote. “This business is finicky and weird and consistency is a rarity. I’ve been lucky enough to be a part of a show where I got to show up and act and laugh and learn with wonderful people. A moment in time I surely won’t forget. Thank you CBS and NCIS for including me in a part of television history.”

Wickersham has since been replaced by actress Katrina Law, who plays Jessica Knight on the hit series. Knight was in a couple of episodes in 2018 and has now become a fully-fledged member of the team. Fans are liking Knight so far but a lot of people want to learn more about her.

Emily Wickersham’s departure was definitely difficult for fans, but ultimately, the show has gone on, and she seems incredibly happy with her Valentine.

If you want to catch the next episode of NCIS, you’ll have to wait until Monday, February 28th. The show is on a hiatus during the Winter Olympics but will be back to its regularly scheduled programming by the end of the month