‘NCIS’: Where You Recognize Marcie Warren From

If you’re not sure where you’ve seen NCIS character Marcie Warren before, know that you’ve probably seen her in other shows over the years. 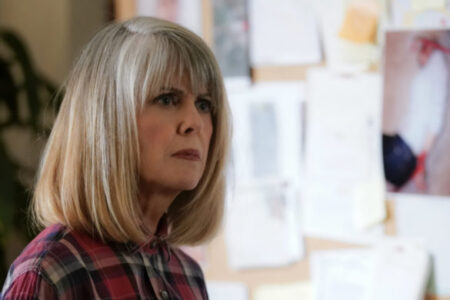 That Episode 11 is Warren’s introduction to the show, but not her real-life husband, Harmon. Looper took note of Warren’s work on the show.

The “NCIS” show is a family affair even. Pam Dawber and Harmon married in 1987 and have two children. One of the couple’s two sons, Sean, even played a younger version of Gibbs.
Dawber Is a Longtime Hollywood Actor

From there, she’s been in 40 different productions, including her starring role with the late actor-comedian Robin Williams in “Mork & Mindy.” In that ABC Network show, Dawber starred as Mindy in the Happy Days spinoff from 1978 to 1982.

Dawber said she had chemistry with Williams, and they both worked to make the show a hit. She plays human to Williams’ humanoid alien in the comedy. The character tries to hide Mork’s true identity from friends and family before the two characters develop a romance.

After the show ended in 1982, Dawber and Williams worked on an animated series called “Mork & Mindy/Laverne & Shirley/Fonz Hour,” essentially a spinoff and a crossover of other shows within the “Happy Days” universe. Unfortunately, the series lasted one season.
Dawber Makes Comeback In Another CBS Show

By 1986, Dawber moved on to another CBS show called “My Sister Sam.” She played, you guessed it, Sam, on the show.

The show’s plot revolves around Dawber’s character taking in her 16-year-old sister just as her professional career as a freelance photographer takes off. The late actress Rebecca Schaeffer also stars in the show. The show worked well the first season, but CBS tinkered with its airtime. Ratings dropped, and the network canceled the show in 1988. The show ended without 12 episodes airing. Tragically, Schaeffer died a year later at the hands of a stalker fan after the final episode.

Dawber put her acting career on hold to have two sons in 1988 and 1992. She didn’t really appear in any film or TV show until the 2000 film “I’ll Remember April.” Dawber joined her husband with the late Pat Morita and Haley Joel Osment for the movie.

In 2014, Dawber returned to “The Crazy Ones” to reunite with Williams and join Sarah Michelle Gellar for one episode. She played Williams’ love interest again in the first season’s Episode 20 called “Love Sucks.” Unfortunately, the show lasted one season.

But Dawber’s found some success with “NCIS.” She went on to play in seven episodes on the show.