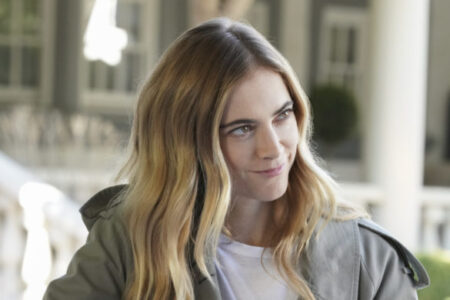 However, we first said goodbye to another fan-favorite character, Ellie Bishop, at the end of season 18. Nonetheless, her actress, Emily Wickersham, remains active on social media, keeping in touch with her large fan base. Most recently, she has followers loving one adorable throwback photo.

Unfortunately, it wasn’t an old throwback from the set of “NCIS” alongside fellow alum, Michael Weatherly or remaining beloved cast members like Sean Murray or Brian Dietzen. However, we do get a little peek at a young Special Agent Ellie Bishop. The photo captures her iconically bright yellow hair, a stark contrast to the toned-down stripes of her vintage turtleneck.

The “NCIS” star’s throwback photo saw much adoration on Instagram, comments exploding with dozens and dozens of heart emojis.

“So cute,” wrote some fans, while others complimented the actress’s early style.

“That turtleneck does wonders for your style,” wrote another “NCIS” fan. “I wish you still had [that turtleneck] too!” read one comment, in reference to the star’s caption, “really wish i still had this turtleneck.”

On another note, we wish the “NCIS” alum would make a surprise return to D.C. among the latest cast changes. However, for now, it appears she’ll be sticking to mom duties as her baby is less than two months old.
‘NCIS’ Recurring Character Returns After Olympics-Inspired Hiatus

“NCIS,” like many of our favorite hit series has been on another temporary hiatus this season due to the ongoing Winter Olympics. Fans haven’t seen a new episode of the CBS show since the end of January, however, with the Olympics set to conclude on Sunday, February 20th, “NCIS” will return with an all-new episode on Monday, February 28th.

In addition to a new episode, however, “NCIS” fans can also look forward to the return of one fan-favorite recurring character.

To our joy, the new episode was written by none other than original cast member Brian Dietzen, iconic for his role as autopsy gremlin turned Chief Medical Examiner, Jimmy Palmer. The beloved actor shared his excitement for the upcoming episode in a post last month, revealing to fans he and cowriters had passed their work on to producers to see the episode come to life.

Alongside Palmer and the rest of the “NCIS” crew, Eaton will reprise her role as Dr. Carol Wilson, an immunologist, when Palmer and current forensic scientist Kasie become exposed to a deadly biotoxin.

Be sure to tune in later this month when the series returns to CBS at 9 p.m. EST.