‘NCIS’: How Many Episodes Was Maria Bello In?

When it comes to “NCIS” guest stars, Maria Bello has to be at the top of the list. 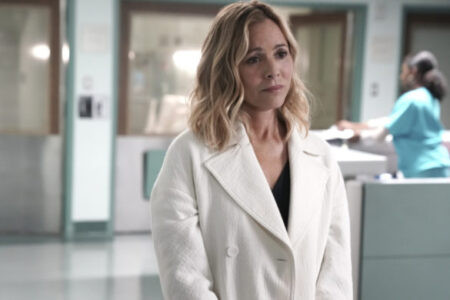 There’s been no shortage of guest stars during the 19-season history of the drama series. Before Gibbs exited the series at the beginning of this season, several guest stars typically revolved around him or his past.

This was the case for Maria Bello. She played forensic psychologist Jack Sloane, who also happened to be a close confidant for Gibbs. She was an Army veteran as well as a part of Gibbs’ NCIS Major Care Response Team that he put together.
Jack Sloane on ‘NCIS’

The first time we met Jack Sloane was in the Season 15 episode called “Skelton Crew.” Then, we said goodbye to her about four seasons later with the Season 18 episode, “True Believer.” Her reason for no longer appearing on the show is that her character decided to do public service work in Afghanistan instead. She took a past full of darkness and troubled experiences and decided she wanted to help promote peace.

It may seem like a short period of time, but Maria Bello was with “NCIS” for quite the long run. Her IMDb page suggests that she appears in a total of 73 episodes from 2017 to 2021. She was only in four seasons, which makes this a pretty decent number. Even when you compare her to favorites like Pauley Perrette, Michael Weatherly, and Rocky Carroll, who have upwards of 300 episodes, her stint on the show was pretty sizable.

Jack Sloane was far more than any ordinary guest star. Her character became deep, emotional, and far more complex than viewers may have initially realized. We laid witness to moments that shook us to our core. That includes meeting someone who kept her as a prisoner of war and, perhaps most memorably, reuniting with her long-lost daughter after years away.

Besides that, she was one (of many) romance possibilities for Gibbs. This is partially what makes her final episode in the series one of the most memorable. She bid farewell to Gibbs with a small kiss, which was a pretty perfect way for this “will they, won’t they” duo to say their goodbyes.
Where Else Do You Know Maria Bello From?

Her long stint on “NCIS” is far from Maria Bello’s only role in the acting world.

The 54-year-old actor got her start with prominent movie and TV roles in the late 90s and early 2000s. Some of the roles include “Permanent Midnight,” “Payback,” “The Cooler,” “A History of Violence,” and “The Mummy: Tomb of the Dragon Emperor.”

Out of all her gigs, she’s perhaps most memorable for her role in the iconic film “Coyote Ugly” in 2000. Her roles in “The Cooler” and “A History of Violence” both got her Golden Globe nominations.