Remember that final NCIS scene last month, when an empathetic Jimmy put his hand on Torres’ shoulder and talked to him about the anxiety he’s feeling? It was a beautiful moment between Jimmy (Brian Dietzen) and Torres (Wilmer Valderrama). 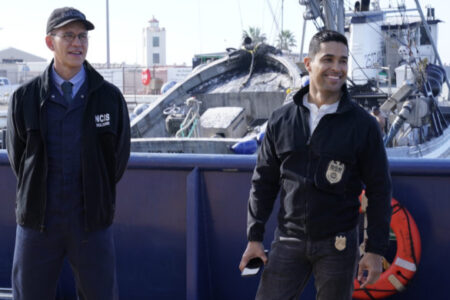 Torres is suffering, possibly because he feels abandoned by father-figure Gibbs. (Mark Harmon left the show after a four-season arc to kick start season 19).

Many NCIS fans pondered whether the show would pick up this Torres storyline when the show ended its Winter Olympics hiatus. So good news, NCIS fans, the answer is yes. And possibly, we’ll see Torres with less angst by the end of the hour.

Dietzen co-wrote the next episode, which is called “The Helpers.” It features the appearance of fan-favorite Carol Wilson (Meredith Eaton). And Dietzen said it will include a “next step in (Torres’) journey.” That’s according to TV Line. Torres, who volunteered for a cage fight against a much bigger man in the last episode, is still despondent. And it’s getting worse.

“Wilmer just kind of knocks it out of the park,” Dietzen told TV Line about the new NCIS episode. “There are a couple of moments that definitely got me, you know?”

First, let’s go to the CBS plot synopsis for more details: “While investigating the death of an intruder at Quantico, Jimmy and Kasie are exposed to a deadly biotoxin, and the NCIS team calls on Dr. Carol Wilson (Meredith Eaton) for help as they race to find the antidote. Also, Torres tries to distract Jimmy’s daughter, who came to the office to spend the day with her dad.”

Yes, this is a very Jimmy-centric episode as well as Dietzen’s first major writing project since 2012. Jimmy is a widower. His wife died of Covid-19 in 2020 at the beginning of the pandemic. So he’s raising their daughter, Victoria, as a single dad. Victoria was born in 2015, and that’s the last time NCIS fans saw her on the show. Plus, Breena Palmer (Michelle Pierce), Jimmy’s dead wife, is listed in “The Helpers” episode, although it’s unclear if she’s seen in flashbacks or a dream. We’ll have to wait until Feb. 28 for that particular detail.

Jimmy talked to Torres about Breena’s death in the last episode. He confessed he’s still mad at her for leaving him. He then told Torres: “You have to open yourself up again if you ever want to heal.” Everyone in the office was worried about Torres, since he was canceling plans with his work friends. And then he insisted nobody at work really was his friend.

The consensus was Jimmy needed to have a heart-to-heart talk with Torres. So it seems that in “The Helpers,” helping Victoria might serve as a conduit to helping Torres heal.

If you’d like to catch up on NCIS, check out Outsider’s recap of “Fight or Flight.” And, if you’d like to know more about the Carol Wilson character, click it here.