‘NCIS’: Are Michael Weatherly and Sean Murray Friends Off the Screen? 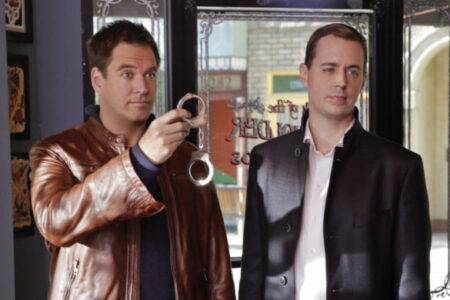 Further, as “NCIS” fans have seen on social media, both actors have a love for their characters and costars that goes beyond the confines of the agency’s squad room. As such, we’re curious. Are Michael Weatherly and Sean Murray friends off-screen?

The answer is a whole-hearted yes. According to Nicki Swift, the “NCIS” stars first became friends when Murray made his debut as Special Agent Timothy McGee in season one. He then later became a series regular in season two. Of “NCIS’s” 19 seasons, Murray and Weatherly starred alongside each other until the latter’s historic departure in season 13.

According to the outlet, it was “especially hard” on Sean Murray when Special Agent DiNozzo said goodbye to “NCIS.”

Regardless, on social media, we can still find the actors boasting of their friendship long after Weatherly’s split from “NCIS.”
DiNozzo and McGee Shared a Brotherly Relationship

During a 2016 interview, the McGee actor shared he and Weatherly’s friendship had been “naturally built over time.”

While starring together on “NCIS,” McGee and DiNozzo often demonstrated brotherly-like traits in their interactions. The two characters were at each other’s throats as often as they were found protecting one another.

Murray previously shared with ET that following his costar’s departure from “NCIS,” it was incredibly hard to adapt.
‘NCIS’ Adds Another Spin-Off to the Lineup

“NCIS” has seen ongoing success since its debut in 2003. And now, its growing collection of spin-offs speaks to the franchise’s popularity with fans. Alongside “NCIS: Los Angeles,” which has seen continued success since September of 2009, CBS is rapidly broadening its international reach.

Last fall, “NCIS” fans were introduced to the Pearl-based crew on “NCIS: Hawai’i,” led by Special Agent in Charge, Jane Tennant. Now, in quick succession, the network’s Paramount streaming service is adding yet another spin-off. And this time, we head far from the U.S.

While our teams have been to famous cities and ports all over the world, fans can look forward to the addition of their first non-American agency. Further, the new series is set to debut on Paramount+ in 2023, speaking to CBS’s efforts to broaden the streaming service’s reach. Of the endeavor, ViacombCBS President George Cheeks said the new project, “[represents the] new ways we are expanding our studio footprint while supporting the company’s mission to drive streaming.”