The wait for new NCIS episodes is finally almost over following its lengthy hiatus from CBS to make way for the Winter Olympics in Beijing, China. And while fans can’t wait to see what kind of fun and turmoil the likes of Nick Torres (played by Wilmer Valderrama), Jessica Knight (Katrina Law) and the rest of the team get up to on-screen, it seems they’re having just as much fun when the cameras stop rolling.
Both Torres and Knight will reunite with the likes of Parker (Gary Cole), McGee (Sean Murray) and Director Vance (Rocky Carroll) on screens on Monday, February 28.

With less than a week to go, CBS has teased fans with what’s in store in the episode titled The Helpers thanks to a series of first-look promos.

And it certainly sounds like it’s going to be unmissable with not one, but three faces from years gone by set to make their return to the action.

Jimmy Palmer (Brian Dietzen) will reintroduce his daughter Victoria (Elle Graper) to the fray, medical expert Carol Wilson (Meredith Eaton) will return, and it looks like there’s set to be some flashbacks with Jimmy’s ex-wife Breena (Michelle Pierce). The synopsis for the instalment reads: “While investigating the death of an intruder at Quantico, Jimmy and Kasie (Diona Reasonover) are exposed to a deadly biotoxin, and the NCIS team calls on Doctor Carol Wilson (Meredith Eaton) for help as they race to find the antidote.

So while it sounds like there’s going to be a serious race against time, Torres’ attempts at guardianship for the day are also bound to bring with it some hilarity.

But on his Instagram, Valderrama proved it’s not just on-screen that the cast share one of two comical moments. 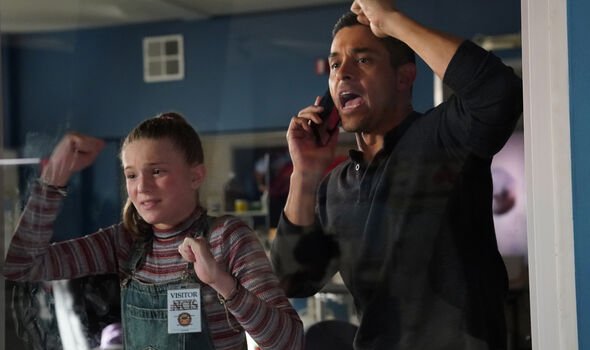 In the team’s interrogation room, Valderrama tried to give fans an update on the new NCIS episodes.

With the words “#NCIS, February 28th” written over the video, Valderrama then turned his camera from a selfie angle to show co-stars Carroll and Law behind a pane of glass.

But things quickly went awry for the Torres star when Law began pulling faces and dancing around behind him.

“You can expect that and so much more, next Monday the 28th,” Valderrama said, before having to cut his sentence early through laughter.
While Law may have derailed Valderrama’s update, she didn’t stand in the way of another social post he did alongside co-star Murray ahead of the next episode.

With The Helpers being co-written by Palmer star Dietzen, both Valderrama and Murray wanted to pay tribute to their colleague and his hard work.

Shared on Murray’s Instagram page, the video tribute opens with Valderrama saying: “Hello everyone, we’re here on the set of NCIS, it’s you boy Wilmer…”

“And your boy Sean,” Murray adds before the Torres star continues: “Just a reminder that your show’s coming back next Monday.”


“We’ve got a good one coming for ya,” Murray interjects before Valderrama goes on: “And this is a big tribute to our boy Brian Dietzen.

“He worked really hard on this episode, I think you’re going to be blown away by how beautiful his words are gonna play.”

Murray then signed off by assuring fans “this is the first one Brian has written for us but I don’t think it’s gonna be the last”.

NCIS season 19 returns to CBS in the USA on Monday, February 28. A UK release date is yet to be announced.