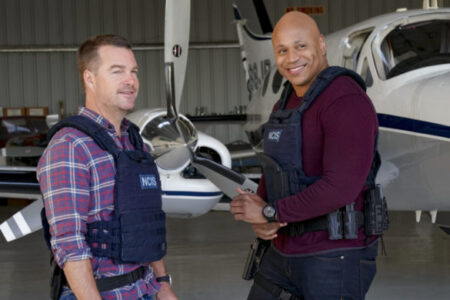 CBS scheduled a premiere date of April 15 for Come Dance with Me. The two NCIS: Los Angeles stars, who are partners on the series, created the reality dance show and serve as its executive producers. And here’s what it’s about. Talented young dancers from across the country will compete. That’s not a novel concept. But the twist is what makes it unique. Each of the competitors will invite one family member to partner with them. The family members must not have had dance training.

Professional choreographers will help the contestants with their dancing as they compete against other duos on the show. The series will be hosted by eight-time Grammy-winning songwriter Philip Lawrence. Judges are Jenna Dewan, Dexter Mayfield and Tricia Miranda.

In a statement, the two NCIS: Los Angeles stars said: “Come Dance With Me is a fun show with a big heart. The show is about being creative, having a good time and bringing families together through dance. We can’t wait to see what these kids and parents have in store for America!”

O’Donnell and LL Cool J each have big families. O’Donnell and his wife, Caroline, have five children. LL Cool J and his wife, Simone, have four. Plus, the recent inductee into the Rock and Roll Hall of Fame is the grandfather of two. So family friendly fits each man.
https://outsider.com/wp-content/uploads/2022/02/ncis-los-angeles-chris-odonnell-ll-cool-j-hosting-family-dance-competition-series-2-1024×614.jpg
Good News for NCIS: Los Angeles Fans. Show Finally Returns Sunday

If you’re a fan of NCIS: Los Angeles, we bring good news. The series finally returns from a lengthy hiatus this Sunday.

Fans have needed all their patience with NCIS: Los Angeles. The show ran a new episode Nov. 21, then didn’t return until Jan. 2. There was another Kensi-centric episode on Jan. 9, but nothing since then.

CBS has had reasons. The NFL playoff season forced the network to pull an NCIS: Los Angeles doubleheader from the lineup that had been set for Jan. 23. Like all the major CBS primetime programming, NCIS: Los Angeles then went off the air as NBC broadcast the Winter Olympics.

This Sunday’s episode is called “Under the Influence.” It’ll feature the character Aliyah De Leon, the special agent who assisted in “Land of Wolves.” On the show, she’s a long-time friend of Sam’s (LL Cool J) who was pulled into the LA office because they were short-handed.

The agents have a big case to solve. Here’s the plot synopsis: “The NCIS team helps a U.S. ambassador search for her missing daughter, Gia (Caitlin Carmichael), a popular social media influencer.”

The other NCIS: Los Angeles episode that had been slotted for the January double header now will run March 6. That’s “Where Loyalties Lie.” And this is the plot tease from CBS: “When a civilian scientist working with the marines is k*****, and her advanced radar technology stolen, the NCIS team must scramble to find the missing technology and the culprit.”