‘NCIS’: Palmer’s Daughter Shows Off Her Humor in Sneak Peek

Recently, we got a sneak peek at the upcoming “NCIS” episode, and it’s safe to say that Victoria Palmer gets her humor from her dad. The preview of the episode “The Helpers” features Palmer bringing his daughter to see the team. McGee and Torres immediately greet her, with Victoria running up to hug McGee and call him “Uncle Tim.” 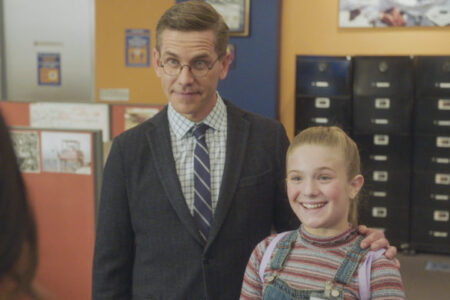 Torres calls her “Crown Vic” and she calls him “Uncle Nick.” The two share a secret handshake that is just the cutest thing ever. Torres asks if it’s bring your daughter to work day, and Victoria says, “Not exactly.” But Palmer doesn’t explain why she’s there just yet, because Jessica Knight shows up to the bullpen, exclaiming, “Is this the famous Victoria Palmer I’ve been hearing about?”

Apparently, Palmer has been telling Victoria stories about Agent Knight. Victoria greets her, and Knight insists that she call her “Jess.” She’s a bit awkward trying to relate to Victoria, complementing her shoes and her backpack. It’s funny, but seems a bit weird, because doesn’t Knight have a niece? Shouldn’t she know how to talk to kids? Maybe she’s just weird around children she doesn’t know. Then again, she could be totally awkward around her own niece as well. Hopefully she gets to relate to Victoria a little better as the episode progresses.

Palmer introduces Victoria to Alden Parker, and she says, “When did Gibbs grow a beard?” Palmer and Parker think she’s serious, but when her dad starts to explain, she gives him a sly little look.

“You got me,” says Palmer. “She’s pulling our leg,” he tells Parker. Parker says, “A real chip off dad’s block, huh?” No kidding. Victoria is sweet, and so kind, but she has a funny streak a mile wide.
‘NCIS’: Sean Murray and Wilmer Valderrama Praise Brian Dietzen Ahead of New Episode

If you’ll recall, “The Helpers” is the “NCIS” episode that star Brian Dietzen co-wrote with frequent contributor Scott Williams. Co-stars Sean Murray and Wilmer Valderrama took to social media to shout out Dietzen and the new script.

“Huge love for the best bud brian!” wrote Murray on Instagram. “[M]r. dietzen, along with scott williams, delivered a hell of a script. Enjoy this brand new episode next monday 9pm, feb 28.”

Valderrama and Murray are known for doing funny little promo videos for “NCIS” on Instagram, and they didn’t disappoint here. The two riffed back and forth in the comments, with Valderrama writing, “Just a quick little reminder that your show is coming back, next Monday,” and Murray replying, “Monday, we got a good one coming for you.”

Valderrama also praised Dietzen on his social media, writing, “This is a big tribute to Brian Dietzen, he worked really hard in this episode. I think you guys are gonna be blown away by how beautiful his words are gonna play.”