When you watch NCIS, there are so many characters to watch and observe on the TV screen. One of those is Kasie Hines. Who plays her? 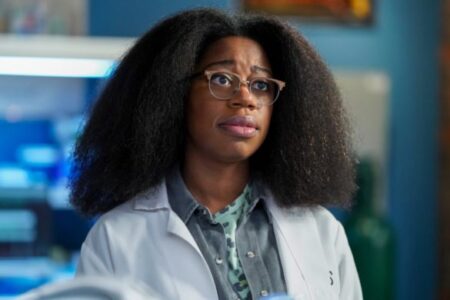 Diona Reasonover plays Kasie on the CBS drama. But we have a little more detail about the actress. Let’s get to it with some help from Looper.

Now, before she was hired as an actress on NCIS, Reasonover was mainly doing comedy. She said that she does not mind doing comedy, too.
‘NCIS’ Actress Says That She Is Classically Trained For Her Work

“I’m classically trained, so I actually started off pretty much doing Shakespeare, Ibsen, and Chekov. … This is getting to combine my two worlds,” Reasonover said in an interview with Parade. “I didn’t start comedy until really 2011 and I simply started doing improv and sketch because I was tired of going on stage and pretending to cry for two and a half hours.”

But the NCIS actress also loves to write as much as act. She has done work on shows like I Love You, America, and Adam Ruins Everything. Guest-starring roles have been a part of her career, too. Among them are Girl Meets World, 2 Broke Girls, and Transparent.

Those appearances gave her a boost in acting work. Then, in 2017, the NCIS actress got cast as Estelle Kronish in Future Man which starred Josh Hutcherson and Haley Joel Osment.
Reasonover Stays Focused More on Her Acting Work Right Now

Still, upon joining the CBS drama, Reasonover has been keeping her eyes on acting more than writing. She had a starring role in Film Fest and a guest role in the series No Activity.

There was one episode where Reasonover got to work with Pauley Perrette, who played Abby on the show. Reasonover said Perrette was “so warm. She gave me this huge hug. She could see that I was nervous and she told me, ‘Just be yourself,’ and it was so comforting.”

If you have been following NCIS, then you know that the show has been very successful. It’s been on for 19 seasons and had three spin-offs.

When Perrette left in 2018, fans didn’t think there could possibly be a replacement for Abby. That person was Reasonover, who had just been hired for three episodes.

Kasie was first introduced as a graduate research assistant for Dr. Donald “Ducky” Mallard, played by David McCallum. She then becomes a temporary replacement for Abby. Soon, though, Kasie joins up as the Major Case Response Team’s new, permanent forensic scientist. The character really is quirky and happens to be on edge sometimes. In the past few seasons, though, she’s getting more comfy with the co-workers.