We all know that Ziva David, the Israeli-born NCIS agent, could take down any c*****l. Nothing phased her. 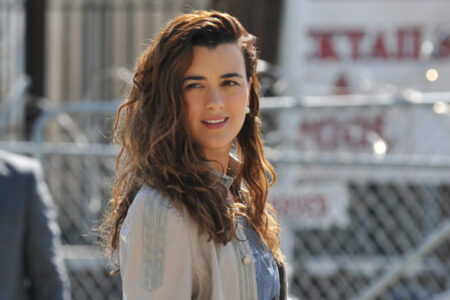 But Cote de Pablo? She did a beautiful job acting the part of Ziva. Because until she joined the NCIS cast in 2005, she’d never even held a gun much less fired a Sig Sauer.

Plus, she had to learn to do her own stunts. Looking back on the NCIS past, Ziva was even more impressive.

De Pablo talked about her early jitters portraying her character during an interview with CBS This Morning.

“Was I nervous — that’s an understatement,” de Pablo said. She described going to a sho****g range to learn how to handle a gun. Or to at least look like she knew what she was doing.

“And I remember holding the gun and just trembling,” the NCIS star said

De Pablo said that she did suffer a neck injury performing one of her stunts.

“It was a very simple stunt,” de Pablo said in an interview with Prevention. “I had to say one line, turn around, and then there would be explosions, gunshots, all sorts of things. But we had never rehearsed it, so I had no idea what it was going to be like.”

She said debris started flying at her. De Pablo suffered bruises all over her body. Then two days later she woke up with intense neck pain.

De Pablo’s first NCIS appearance was in the premiere of season three. She was only 25 when she earned her first big network role. And her backstory was complicated. She was a Mossad agent and the daughter of the spy agency’s deputy director. Plus, her half-brother, Ari Haswari, killed agent Kate Todd.

Ziva and de Pablo stuck with NCIS through season 10. Her final episode as a full-time cast member was “Damned If You Do” in May, 2013. In the hour, Ziva, McGee and Tony resigned to protect Gibbs in an investigation. McGee and Tony rejoined the team after the investigation was finished. But writers had Ziva move back to Israel.

Then CBS president Les Moonves said the network wanted one of its brightest stars to remain on NCIS. “We did everything humanly possible,” Moonves said. “We feel like we exhausted every opportunity, and she just decided she didn’t want to do the show.”

No one really knew what happened to Ziva until three years later. That was when Michael Weatherly decided to leave the show to star in Bull. In sending off Tony, writers also explained Ziva. It seems that DiNozzo was leaving D.C. to take care of the daughter he had with Ziva. But Ziva died in an explosion at her father’s farmhouse in Is**rael.

But we all know that death never needs to be permanent when it comes to TV. De Pablo and Ziva came back to NCIS for a story arc that started late in season 16. Ziva faked her death to try and find out who was trying to k****l her.