Husband Message Goes Viral After Posting This About His “Curvy” Wife

Social media is very powerful. It has the ability to affect each one of us in some way. Probably, majority of your family and friends now have social media accounts. And we cannot deny that social can either be constructive, or destructive. 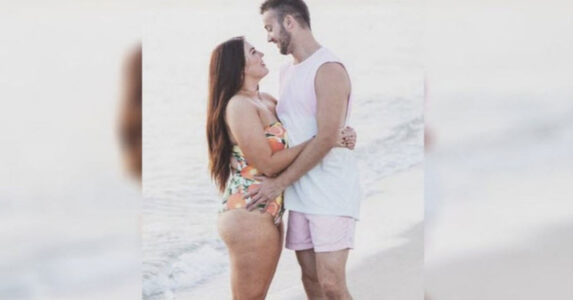 When it comes to our perception of what a perfect human body is like, especially for women, social media has definitely a huge influence on that matter. That is why body shaming becomes one of the most heated topics for debate when somebody decides to take notice of another person’s figure in a negative way.

Recently, body image is a very serious subject. And only a few can tell you that they are not struggling with it. In fact, even those with beach-ready bodies will still complain about something that they don’t like to see in their reflection in the mirror. Both men and women are affected by this. And for some, it becomes a destructive influence as it causes problems like anorexia or bulimia.

They say that if you are looking for someone to share the rest of your life with you, find a person who will accept and love you for who you are. And this is what this man is trying to prove after he posted something about his wife on social media.

Robert Tripp posted something on Instagram about how “many men have bought into that lie.” Thie “lie” that he is referring to is about women that needs to be tall and lean. Then he talkies about why he loves his “curvy” wife.

He started his post by writing: “I love this woman and her curvy body.”

She then talked about how he was teased when he was a teenager because of his attraction to girls on the thicker side. She gets easily attracted to girls who are ‘shorter and curvier.’ Girls who others might refer to as “chubby” or “fat.”

Then he said that when he became older, he started educating himself about issues like feminism and how the media marginalizes women by always portraying a specific standard of beauty – thin, tall, and lean.

“I realized how many men have bought into that lie,” he wrote.

He then continued to say that “there is nothing sexier than this woman right here: thick thighs, big booty, cute little side roll, etc.” He said that this shape and size of a woman won’t be featured on the cover of Cosmopolitan, but it would definitely be ‘featured in my life and in my heart.’

“There’s nothing sexier to me than a woman who is both curvy and confident; this gorgeous girl I married fills out every inch of her jeans and is still the most beautiful one in the room.”

He also has a bit of advice on girls saying that women should not fool themselves by thinking that they need to fir a certain mold just to be loved and appreciated.

And yes, everyone agrees with him that there is a guy out there that will celebrate you for exactly who you are. “Someone who will love you like I love my Sarah,” he wrote.

This post went viral quickly. Now, other men all across the globe are also tagging it with their wives and girlfriends.