For some shared universes, crossovers happen pretty often, like One Chicago and Law & Order. 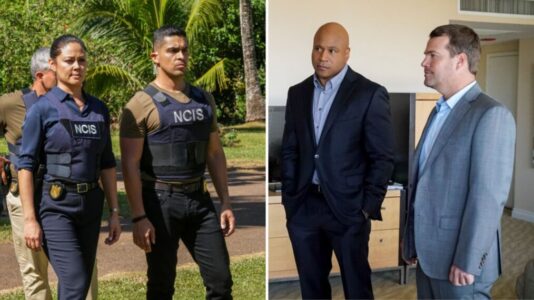 For others, those events are much more rare. Such is the case for the NCISes on CBS. But now it seems there might just be a big, three-show crossover during the 2022-2023 season.

“We’ve talked about [a crossover] a lot, and actually the studio [recently] asked me about it,” NCIS: LA executive producer R. Scott Gemmill told TV Insider while discussing the Season 13 finale. “It’s only a matter of logistics. If we were going to do it, we’d want to do it over all three series. Doing one crossover with one show sort of feels like you’re leaving somebody out… I’ve already talked to the other showrunners, everyone’s sort of up for it. It’s just the practicality of pulling it off is a little tricky.”
Coordinating is the trickiest part, especially considering NCIS: Hawai’i films on the island. “It’s a little easier for us because we have a good size cast and we’re used to shuffling people out in a way for different reasons,” Gemmill explained. However, as NCIS executive producer Steven D. Binder pointed out, “You lose actors not just for a crossover. We lose them for the shows that we’re doing on either side of the crossover.”
That being said, Binder added, “I believe it’s in the cards, just based on how well it went [with NCIS and Hawai’i]. Last season was a trial run. Hopefully this season will have greased the wheels a little more.”

NCIS: Hawai’i executive producer Jan Nash agreed that “the chances of a big crossover are quite high,” especially after how much “fun” the latest one was, in which Nick Torres (Wilmer Valderrama) and Jessica Knight (Katrina Law) headed to the island. “Chris Silber and Megan Bacharach wrote a wonderful episode and it ended up containing so many bits and pieces that the fans could love and that we could build on, and hopefully it won’t be the last we’ll see of any of those characters on NCIS Hawai’i,” she said. As for something on a smaller scale, say bringing back a couple JAG characters — Catherine Bell’s Sarah “Mac” MacKenzie and David James Elliott’s Harmon “Harm” Rabb, Jr. — on NCIS: LA after their guest spots in Seasons 10 and 11, Gemmill’s not ruling that out. “I’m still really good friends with David and Catherine and talk to them all the time, and I’ve written some stuff for both of them in the last little bit, trying to get some new stuff off the ground,” he said. “I think it could happen. I love working with them. It was such a treat to bring them both back and to be able to write for the same character and the same actor — for me, it was probably 20 plus years with [them]. And yeah, they’re both up for it.”

He added, “It’s always just about getting the story, having the story and then making sure that those guys are available for when we have to shoot it.” After all, they would have to coordinate their schedules, and COVID protocols and quarantining have made that even more difficult.