CBS finally revealed its fall lineup earlier this week, including the premiere dates for our favorite shows like “NCIS: Los Angeles.” 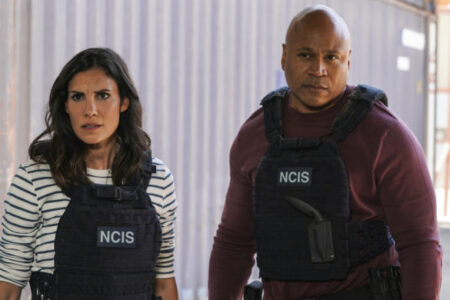 “Down the Rabbit Hole” – The NCIS team must quickly find Callen after he falls for Katya’s trap using Sam’s deepfake to coordinate a weapons deal, on the CBS Original series NCIS: LOS ANGELES, Sunday, May 15 (9:00-10:00 PM, ET/PT) on the CBS Television Network, and available to stream live and on demand on Paramount+*.
Pictured (L-R): Daniela Ruah (Special Agent Kensi Blye) and LL COOL J (Special Agent Sam Hanna).
Photo: Sonja Flemming/CBS ©2022 CBS Broadcasting, Inc. All Rights Reserved.
But unlike the flagship show and its Hawaiian spinoff, “NCIS: Los Angeles” airs a full three weeks later than the other two shows. CBS didn’t explain the reasoning behind the move, but it likely has to do with the Sunday Night Football schedule.

During September, several games will likely overflow into the 10 p.m. EST time slot that “Los Angeles” holds. So, the show will start on Sunday, October 9, instead of Sunday, September 18. The other two “NCIS” shows begin on Monday, September 19.

But TV bloggers Matt & Jess Carter want to know if this late premiere date will affect the episode count for the “L.A.” spinoff. And unfortunately, the answer is likely yes.

For the first several seasons of the show, it aired in mid-to-late September. And it managed to fit in 24 whole episodes. But starting with Season 11, things started to switch up a little bit. While the first half of the season aired in 2019, the second half debuted in early 2020. Right when the pandemic hit, of course. Instead of 24 episodes, “L.A.” dropped down to 22 due to C0V1D regulations.

Then, as C0V1D continued to sweep across the world, the premiere of the show got pushed back to early November. This was a later start than “NCIS: Los Angeles” had ever seen. And it caused only 18 episodes to premiere that season as it took multiple breaks and hiatuses to safely conduct filming.

Most recently, Season 13 aired in early October, around the same time that the new Season 14 will air this fall. It’s encouraging that the show managed to produce 22 episodes despite still dealing with pandemic restrictions. Now that some of those restrictions have been lifted, it’s safe to assume that we’ll have at least 22, if not 24, new episodes this season.

TV bloggers Matt & Jess Carter don’t foresee any issues with the episode count of “NCIS: Los Angeles” this season, despite the later premiere date. But they do take issue with the pushed-back start time, from 9 p.m. to 10 p.m. EST.

On a Sunday night especially, when people have to go to bed at a decent hour to wake up for work on Monday, this could end up harming the show’s ratings. Fewer people are willing to tune into TV that late, especially if they’ve been watching Sunday Night Football already beforehand. Not to mention the fact that if CBS starts airing later games, those could easily crossover into “NCIS: Los Angeles” showtime.

Perhaps the network will bump it back up to 9 p.m. after the midseason hiatus. We’ll have to wait until the new season airs to find out.