NCIS might be seeing the exit of another beloved character as Dr. Donald “Ducky” Mallard returns only to say goodbye once again. 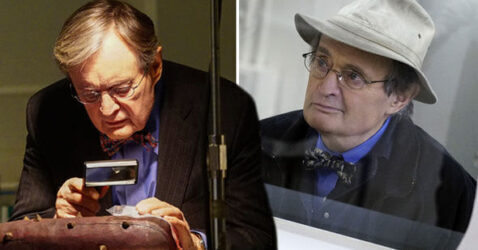 The beloved doctor (David McCallum) finally brought closure after his long absence with a heartwarming return to the CBS c****e procedural, though it seems he might have just come back to say goodbye.

In his first appearance on “Bears and Cubs,” the doctor sweetly said hello to Kasie (Diona Reasonover) and Dr. Jimmy Palmer (Brian Dietzen), but is not met with the warmest of welcomes since Jimmy is distracted from having to lie to Gibbs about the case of the week, on his father-in-law’s request.

The episode also featured the return of Anthony DiNozzo Sr. (Robert Wagner), who shared a sweet conversation with Mallard, also known as Ducky.

After celebrating his return, Ducky tells Anthony that he feels this autopsy might be his last, as he is only in town to attend a special event and, given the fact Jimmy barely reacted to his return, he might no longer have a place within the team.

After hearing that, Palmer comes in the room and admits he only acted strange when he first saw Jimmy because of what was going on with his family and that Ducky will always be an important part of the team.

Ducky has one final moment with Gibbs before he goes out to the party he is attending when he tells him that, while he’s not sure what his future holds, it definitely is not at NCIS. He then gives Gibbs his blessing toname Palmer the head of his department.

Fans of the CBS series felt emotional about the possibility of Ducky’s permanent exit.

“So Ducky came back just to say goodbye, permanently?!?” One user lamented.

“Oh Ducky, we’re gonna miss you in the pond,” Another user wrote.

“No Ducky not your last autopsy, noooo,” A third user commented.

McCallum made headlines ahead of the Season 16 premiere when he announced he had reached a new d*al to return as Ducky for the season, though in a limited capacity.
2comments

“I am delighted to say that I have reached an agreement with CBS for Dr. Donald Mallard to stay with NCIS for Season 16. Once again it will be a limited schedule. That arrangement will allow me to spend time with Katherine, our children, six grandsons and Nickie, pictured below!” The 85-year-old actor wrote on Facebook.

Will you miss Ducky? NCIS airs Tuesdays at 8 p.m. ET on CBS.