So what sort of plot twists may be in store for NCIS: Los Angeles as the series enters its 14th season? Fans want to see a beloved character. Who cares what she’s doing, so long as she’s there. 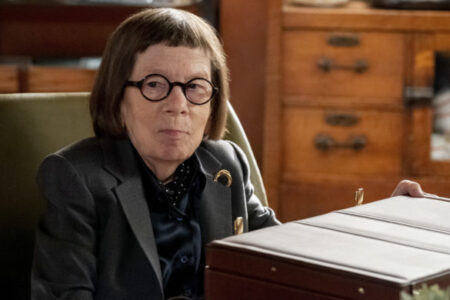 Yes, NCIS: Los Angeles fans want more Hetty Lange. And they also want more interaction between Hetty (Linda Hunt) and Kilbride (Gerald McRaney). Although slight of stature, Hetty could be the most well-connected spy in the world. She knows all. And her staff probably doesn’t know a quarter of the danger she’s been in.

But here’s the problem. Hetty was seen all of one time in NCIS: Los Angeles season 13. And that was in the season premiere. Hunt is 77 years old and the pandemic sidelined her for much of season 12. She did scenes from her driveway as her character was off in a mysterious war zone. But then she returned for season 13. In hindsight, her episode seemed to work solely as a conduit for a Callen storyline that still isn’t totally solved.

Hetty scurried back to Syria and Hunt didn’t appear in another episode. Let’s allow R. Scott Gemmill, the executive producer for NCIS: Los Angeles, to explain what went on with Hetty, behind the scenes.

“She had an operation, essentially two of her people who were in the country were on the right track to expose someone within the Pentagon, in the intelligence community high up, that was a traitor, basically a mole, kind of like the fourth man,” Gemmill told TV Insider. “But before they can get out with proof of that, they are captured and we don’t know if they’re captured because they know who they are or they’re just as captured as part of some of the problems are going over there.

“So ultimately, she went back to try and resolve that with the Keane character,” Gemmill said. “And then we haven’t heard from her since. So part of next season will be our guys finding out where she is, what happened and probably having to go in and pull her out of the fire.”

There was a reference to Hetty in the episode called “All the Little Things,” which ran March 13. Basically, Harris Keane talked about her. Hetty apparently was negotiating with some undesirable character. But she went underground after someone tried to bomb their meeting.

The season 13 premiere of NCIS: Los Angeles did break down more of the Hetty-Callen dynamic. Hetty knew who Callen (Chris O’Donnell) was far earlier than anyone believed. In fact, she identified him as a potential spy way back when he was in foster care. Callen found Hetty’s files that documented this spy program involving foster children. He was “Subject 17,” which said he had an affinity for spy work. So Hetty was correct on that call.