‘NCIS’ Fans Are Disappointed with Show’s Treatment of Past Couples

NCIS fans are noticing it often doesn’t end well for characters who start an office romance on the show. 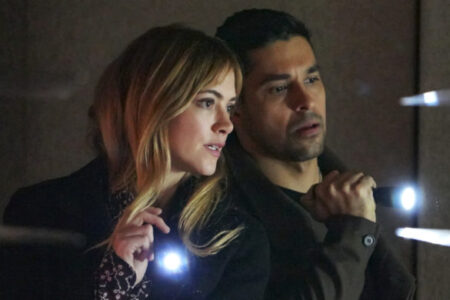 Now, we’re not talking about characters who get married on the show. McGee and Delilah are perfectly happy raising a couple of kids. (But Jimmy and Breena are another story. They were happy until Breena died in the early days of COVID).

But for whatever reason, the office romances end in heartache in season finales. One NCIS fan, who isn’t caught up with all the episodes, was wondering about Nick Torres (Wilmer Valderrama) and Ellie Bishop (Emily Wickersham) back in season 17. It’s an ongoing post on Reddit.

“Am in season 17 and loved Torres and Ellie developing closeness,” wrote a user named cloudsandtreks. “But I’m just wishing they don’t do the tease again like they did with Tiva… you know just moments and nothing really grows. Hope they did a better job with this couple. They are nice together though.”
Ouch! Bishop Planned to Ghost Torres to End This NCIS Relationship

Since NCIS is long past season 17, we all know what happens. Bishop started training for a deep undercover assignment with Odette, a CIA operative. And in the season 18 finale, Torres figured out why she was trashing her agent reputation and tracked her down to Odette’s place. He found her right before Bishop was about to leave. She planned to ghost him. But Odette told her to take care of some loose ends. That was Torres’ heart. Gulp.

Then Bishop put the dagger in the chest and twisted it. “I didn’t mean for us to happen,” she told Torres. She kissed him. And she walked away. Poor Torres still was dealing with a broken heart in season 19.

Now, to be fair, Wickersham wanted to leave the show. It’s difficult to maintain an on-screen relationship when offscreen, the actor leaves for a different job or life experience. Wickersham was pregnant. She and her partner had a beautiful baby boy at the end of 2021.

It wasn’t exactly what happened with another potential great NCIS romance gone bad. Tony DiNozzo (Michael Weatherly) and Ziva David (Cote de Pablo) shared hot chemistry with each other. But de Pablo wanted to leave the show after season 10 in 2013. In the finale, Ziva, Tony and McGee resigned to protect Gibbs (Mark Harmon). But although Tony and McGee came back to NCIS, Ziva stayed in Israel, her home country. So no romance for the couple with the hashtag #tiva.

Then three years later, Weatherly decided to leave NCIS after being with the show since its 2003 inception. NCIS brought back Ziva for the farewell. Check that, they sort of brought back Ziva. The agents found out that Ziva had been killed in Israel. She had a three-year-old daughter (do the math). And yes, Tony was Tali’s father. So Tony left Washington, D.C. to take care of the daughter he never knew he had. DiNozzo settled in Paris with his daughter. Then, when de Pablo came back for a story arc in 2019, she went back to be with Tony. So the two got together, but no fans ever saw it on TV.

“Ziva and Ellie leaving was kinda sprung on the writers by their actors,” wrote NoCommunication1010. “I don’t think they meant to build either relationship up just for one of them to leave. I think it was supposed to be the start of something but in each case one of the actors decided to leave last second.”

But could another couple finally bring NCIS a proper romance?

There is a blossoming romance heading into season 20. Jimmy Palmer (Brian Dietzen) and Jess Knight (Katrina Law) got together in the season 19 finale. So we’ll see if writers give them a proper love story, since neither actor is expected to leave NCIS any time soon.