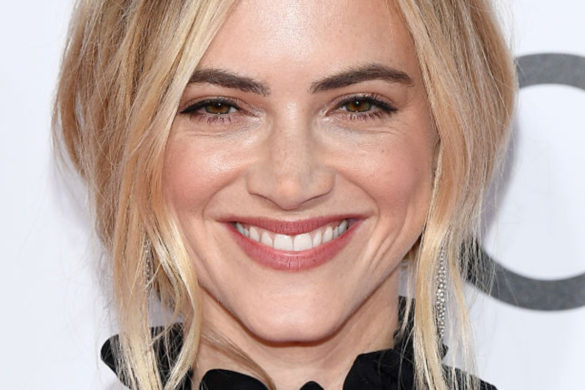 For NCIS alum Emily Wickersham, she’s getting back into the swing of things after having a baby and it includes some surfboard work. Wickersham, who played Special Agent Ellie Bishop on there, gives fans a look at her, well, form. As you can tell from this photo, she’s all dressed up to hit the waves. Maybe she’s listening to some Beach Boys music while getting ready to rock the water. We don’t know what is going through her mind here. But if it’s Surf Camp, as she writes here, then Wickersham is going to school. Enjoy this snap that the actress shared on her Instagram account on Sunday.


See that form? It might help out when she’s on the water. Yet it’s a good time to practice all of her moves before. Wickersham’s time on NCIS would put her in the midst of good storylines. One of them which ended upon her departure was her time with Special Agent Nick Torres, played by Wilmer Valderrama. Wickersham’s Bishop also worked closely with longtime team leader Leroy Jethro Gibbs, played by Mark Harmon. In this photo, she’s getting her picture taken by James Badge Dale.
Fans Go Gaga About ‘NCIS’ Star Emily Wickersham’s Photo

Fans were loving the snap that Wickersham shared on Instagram. A number of comments were about how cute she was on the board. Others were giving her some friendly grief about her pose. It doesn’t actually bring up ideas of “hanging 10” out there on the surfboard. But who knows? Once she gets the hang of that that surfing action, Wickersham just might be a pro at it.

Recently, Wickersham celebrated her first Mother’s Day and had some reflections about it. “Becoming a Mother has changed my life and perspective on things in so many ways,” she writes in another Instagram post. “Cassius [her son] you are the biggest teacher of all… and you continue to amaze me day after day. Happy Mother’s Day to all the Mamas out there.” Wickersham would share a photo of her with a baby bump next to Dale, Cassius’ father.

Beach pictures are a thing for the actress. In sharing another one, she writes that “simplicity goes a long way.” Her full written note states: “simplicity goes a long way when there’ll be days like this”. The photo along with this post shows the sun reflecting off waves crashing into the beachline. It’s quite beautiful and reflects something on Wickersham’s mind at that moment. Right now, we don’t know what is in the cards for her next acting role. Maybe Wickersham is just enjoying her time as a mother these days. We’ll be keeping our eyes open to her career for sure.