David McCallum, aka Dr. Ducky Mallard, the former medical examiner turned NCIS historian, once did an episode of a bawdy comedy that certainly went against type. 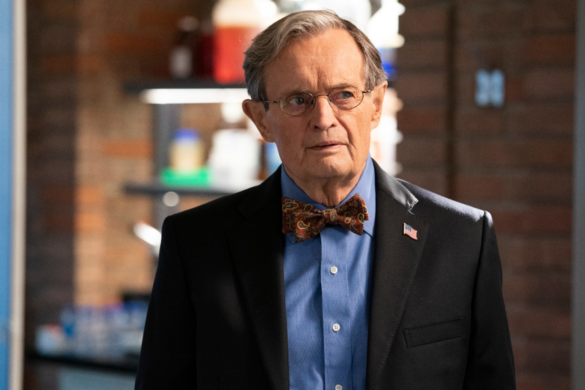 Let’s spin the way back to 1999. Bill Clinton was in his final year as president, MSN Messenger was all the rage and Star Wars made the term prequel a thing. And more specifically, 1999 also happened to feature season two of a ground-breaking comedy about four single women in NYC. We’re talking Se..x and the City.

And on Sept. 12, 1999, HBO broadcast a S..ex and the City episode called “Shortcomings.” It featured an all-star lineup. Valerie Harper of The Mary Tyler Moore Show and Rhoda fame, played a documentary filmmaker named Wallis Wysel. McCallum was her husband, Duncan, a professor. Carrie Bradshaw was dating their son, Vaughn, a writer. The family fell in love with Carrie and vice versa. If only Carrie felt the same way about her budding relationship with Vaughn (Justin Theroux).

When Duncan first meets Carrie, he calls her an “icon.” And he used that term more than once. “Mr. Self-Involved didn’t tell us he was dating an icon,” said the actor who became Gibbs’ best work friend on NCIS.

Carrie stayed for lunch and continued to see the family. It was almost like she was dating Wallis, a kindred spirit. She loved the Wysels so much that she told her friends they were “the Tom Cruise of families.” (And to think, this was way before Top Gun: Maverick).

Alas, Carrie and Vaughn broke up. The S..ex and the City fans didn’t see much of McCallum. Valerie Harper was the scene stealer. But then again, you’d expect that from a classic TV icon.

Meanwhile, McCallum still was four years away from NCIS. He did have a meaty part in the CBS series The Education of Max Bickford. Academy Award winners Richard Dreyfuss and Marcia Gay Harden headlined the series. But despite the talented cast, CBS canned the series after a season

McCallum appeared as Ducky in a two-part episode of JAG that served as the back door pilot for NCIS. This was in April, 2003. And then he was alongside Mark Harmon, Michael Weatherly and Pauley Perrette for the Sept. 23, 2003 premiere of NCIS. Here’s a bit of trivia. Writers named the first-ever episode “Yankee White.”

McCallum is now 88 and he’s cut back on his on-screen time. He officially retired as NCIS medical examiner in season 16 during the episode “Silent Service.” However, Ducky still is part of the show. Leon Vance (Rocky Carroll) made Ducky the official NCIS historian. And McCallum still makes guest appearances. He was there when Mark Harmon’s Gibbs bid farewell to the series last October. And Ducky was in the office for the season’s final two episodes — “All or Nothing” and “Birds of a Feather.”