What happened to Delilah on NCIS? McGee’s wife returns to cast

The return of Delilah McGee to the NCIS cast takes place during the 2021 winter premiere. 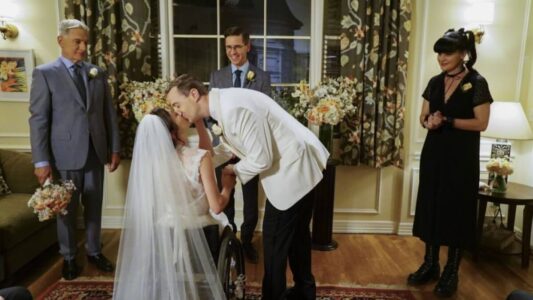 Delilah is slated to appear in the first two new episodes for Season 18, bringing actress Margo Harshman back to the show for the first time in a few years.

Delilah Fielding McGee is a Department of Defense employee and mother to Morgan and John McGee II. She is also married to NCIS Special Agent Timothy McGee and used to be on episodes of the show more frequently.

The first time that the character was mentioned was during the Season 10 episode Damned If You Do. She then appeared in-person for the first time during the episode called Whiskey Tango Foxtrot.

For her return to the NCIS cast, actress Margo Harshman is going to appear in the episodes called Sunburn and Head of the Snake. These episodes serve as part of a double feature on January 19.
What happened to Delilah on NCIS?

During the Season 11 episode called Ki*** Chain, terrorist Benham Parsa (leader of the Brotherhood of Doubt) blows up a gala that Tim and Delilah were attending.

Delilah is seriously injured in the explosion, leaving her paralyzed and in a wheelchair from that point forward. The character goes through a lot as she tries to get used to her new life and the life-altering injury that she has suffered.

The actress playing Delilah is not paralyzed. That’s not the case for actor Daryl “Chill” Mitchell, who plays Investigative Computer Specialist Patton Plame on NCIS: New Orleans. He suffered an injury during a motorcycle crash in 2001 that has led to him now being in a wheelchair.

Who plays Delilah on the NCIS cast?

Delilah Fielding McGee is played by veteran actress Margo Cathleen Harshman. She has been acting for a long time and television viewers have definitely seen her outside of the NCIS cast.

Margo played Alex Jensen on The Big Bang Theory as a recurring character. She was Sheldon Cooper’s assistant and was very funny in the role that she held for a little while.

Way before that show, Margo was seen as Tawny Dean on the Disney show Even Stevens. She also returned for the Even Stevens Movie and then went on to play Brooke Franklin on Run of the House for a season.

Margo has also appeared in a number of films, with small roles in Fired Up!, Sorority Row, College Road Trip, and Extreme Movie.